Discover Portugal, Madeira and the Azores Islands on a sailing boat or catamaran rental

Only a few hours by plane from Switzerland, Portugal, Madeira and the Azores offer the advantage of a subtropical climate with mild temperatures most of the time and regular wind thanks to the trade winds. Our partners' yachts are ideally located in Funchal to explore the islands of Madeira, in Horta and Ponta Delgada in the Azores or on the Portuguese coast from Lisbon, Cascais or Portimão. 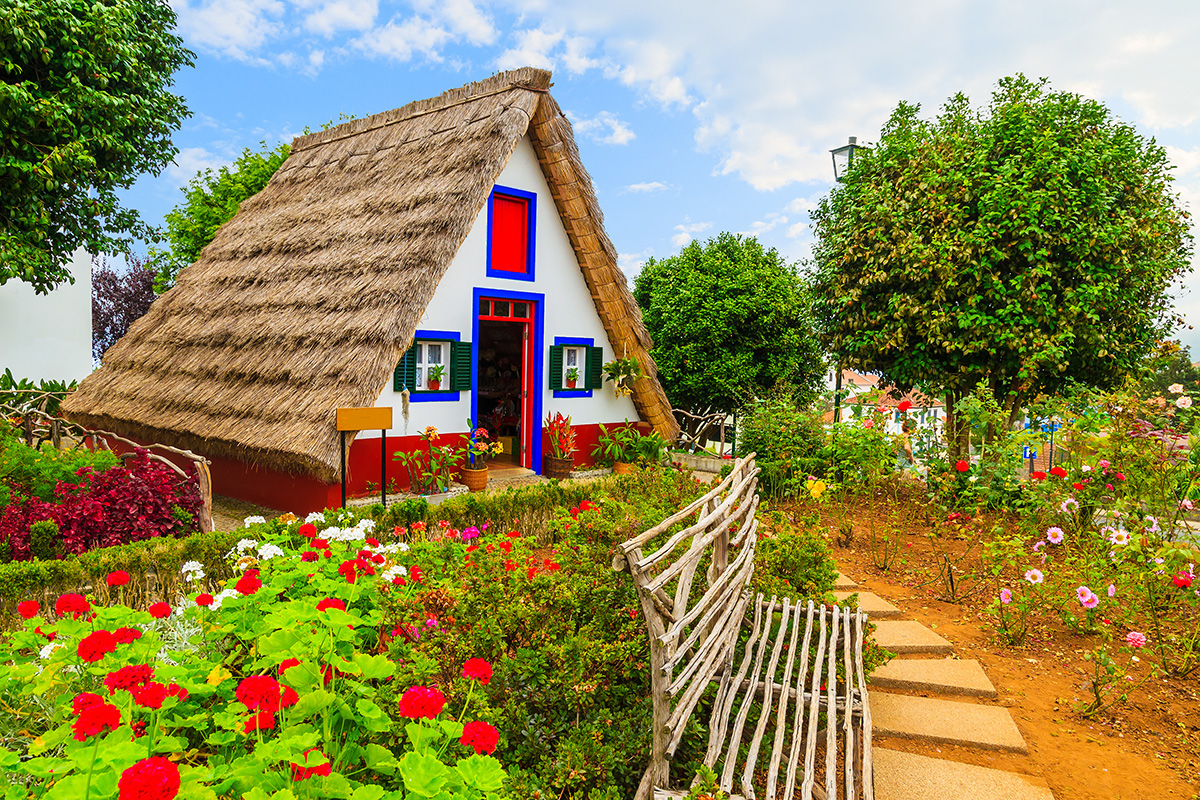 You don't want to cross the Atlantic to go sailing in the Caribbean?

In that case, rent your sailboat or catamaran in Portugal, Madeira or the Azores, which have an ideal climate, beautiful landscapes and reasonable prices. Only a few hours by plane from Switzerland, Portugal and the islands of Madeira and the Azores reveal surprisingly well kept sailing secrets.

Sailboat rental in the Azores

Well known to sailors making a transatlantic return journey from the Caribbean or the United States, the Azores are located in the middle of the Atlantic Ocean, 1,430 km from the European continent and more than 3,900 km from North America.

Our partners' sailing yachts and catamarans for rent are located in Horta and Ponta Delgada.

Horta is a pleasant town to explore with many old stores, cafes and good restaurants. Peter's bar is known as a meeting place for sailors and locals. The town has many beautiful old buildings and was of great importance because of its sheltered port.

Ponta Delgada is the largest city in the Azores and its regional administrative capital. It is now a dynamic and multifaceted city where tradition continues with new contemporary and cosmopolitan trends, interpreted by the tranquility characteristic of life in the Azores. 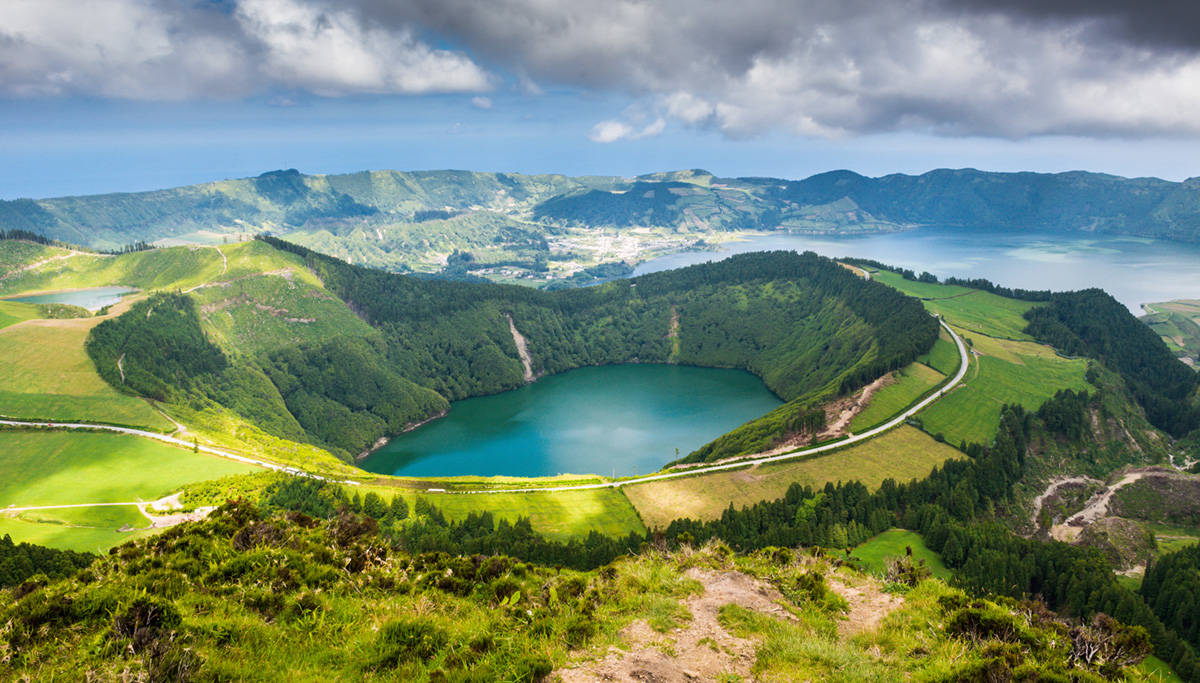 Funchal Marina offers its users a gateway to a city with exceptional environmental and aesthetic quality and a mild climate all year round.

From the Funchal Marina you can easily plan a tour of the island if you have a week or more of Madeira yacht charter ahead of you. Well protected from the wind, the west coast of the island will allow you to discover the beautiful seaside resorts of Quinta do Lorde and Calheta. You can also set sail to the splendid Desertas Islands located further east or even go up to the island of Porto Santo.

Located 24 NM northeast of Madeira Island. It is famous for its golden sandy beach and its medicinal qualities as well as for the pleasant nature of its inhabitants. 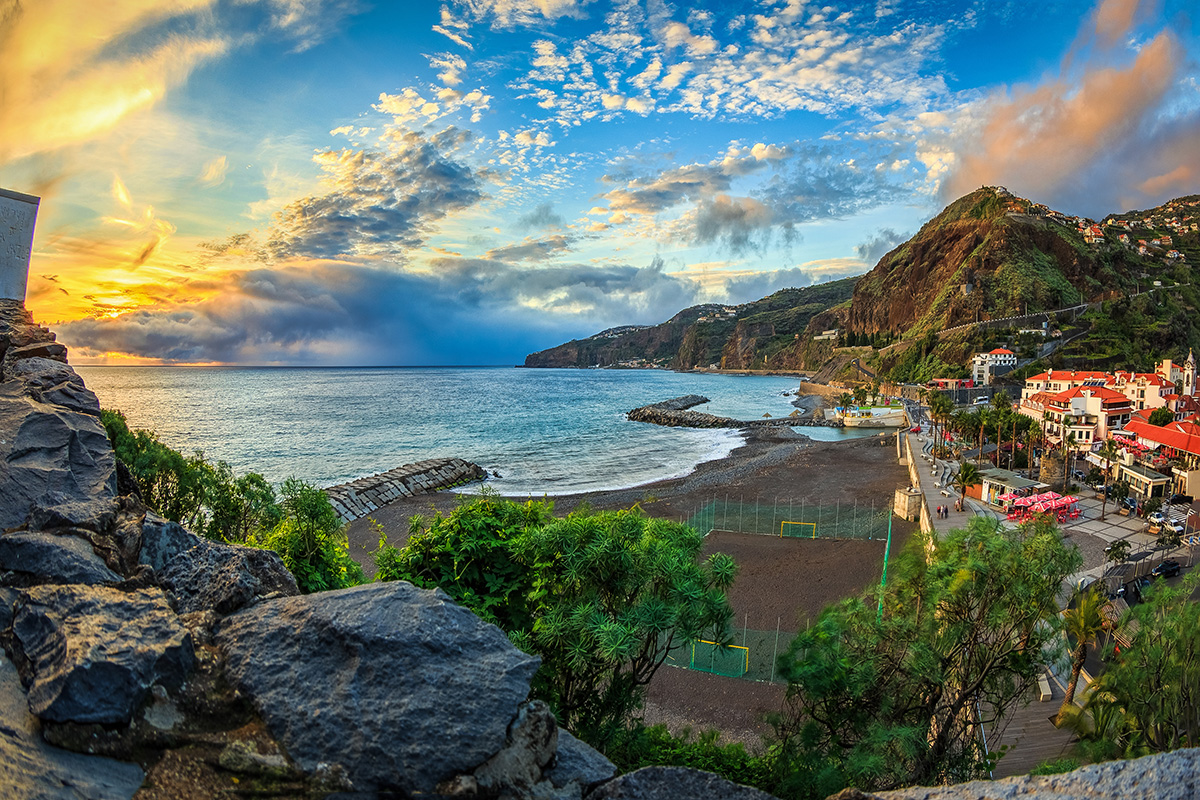 With 194 berths for boats up to 12 meters long and several facilities for the repair and maintenance of boats in dry dock, the Doca de Belém represents an important symbolic place for all the navigators of the world.

It was from where the Portuguese ships left in the 15th and 16th centuries on their voyages of discovery and thus completely revolutionized the world of sailing and navigation.

This marina is therefore surrounded by an impressive set of monuments, including the Mosteiro dos Jerónimos, a masterpiece of Portuguese architecture of the sixteenth century and has been classified by UNESCO as World Heritage. 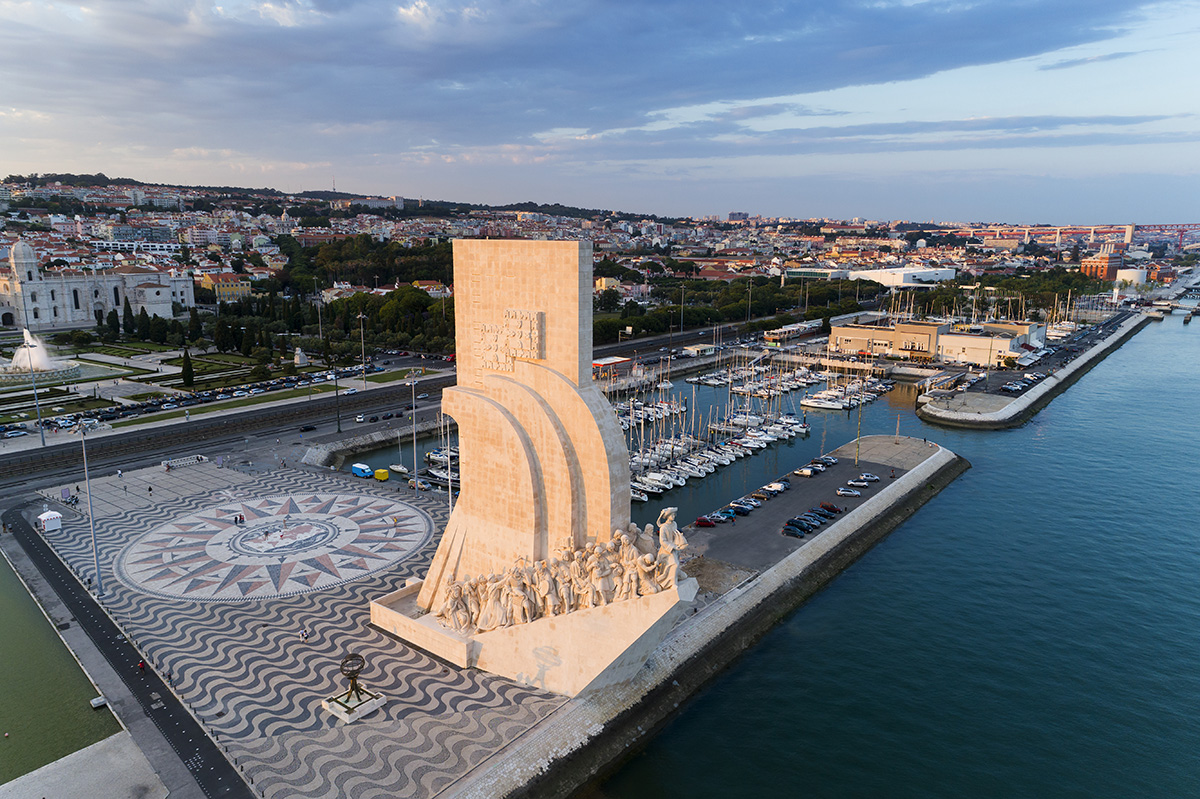 Sailing along the Algarve coast is a beautiful, rewarding and relaxing experience.

Wherever you look from the Portimão marina, the colors of the mountains and the sea are always with you, creating the impression of a watercolor dotted with golden, green and blue reflections. The area is vast and pleasant, with a Mediterranean climate, marked by the smell of the sea at low tide and the scent of wild flowers.

Here, the scenery is composed of some of the most beautiful beaches in the world, from where you can admire the rocky coastline and the playful shadows cast on the sand. After the enchantment of the landscape, you will discover the aromas and flavors of the traditional cuisine of the Algarve. 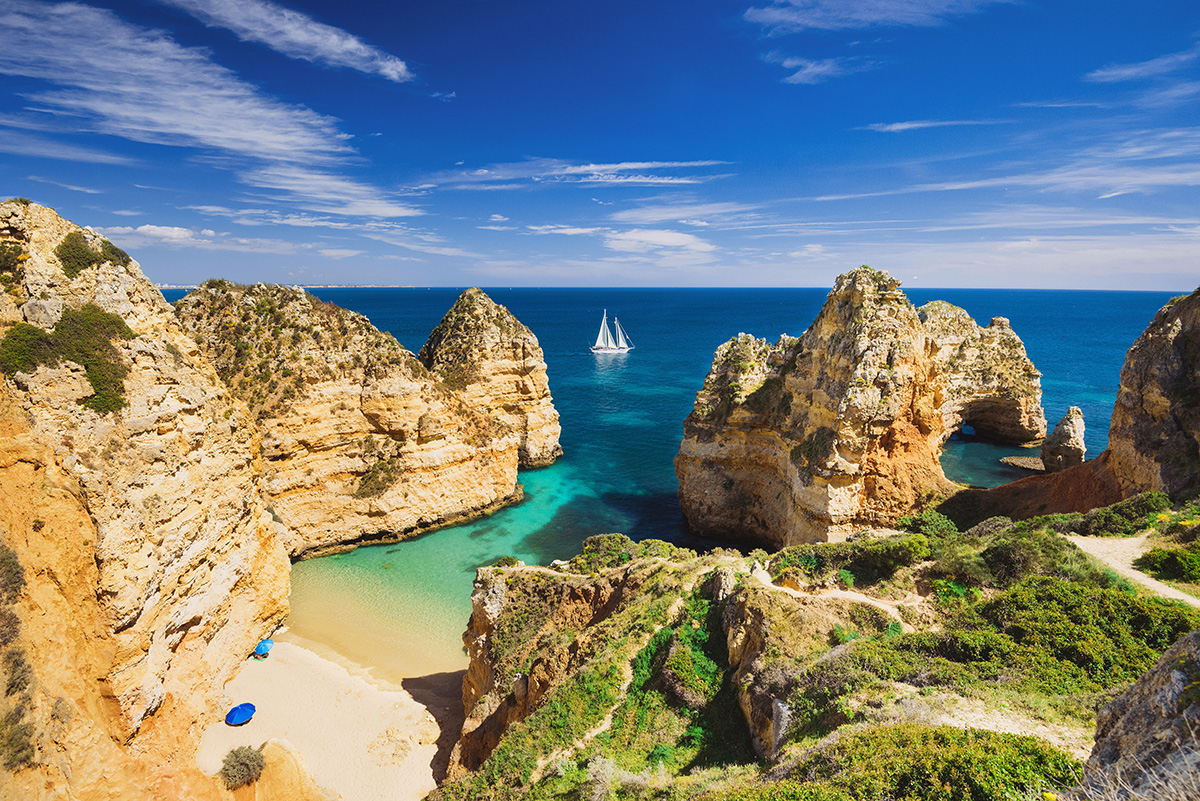 Madeira is an ideal travel destination, as it can be visited all year round. With a subtropical climate, temperatures are mild most of the time. There is little difference in temperature between summer and winter: 17 to 18°C on average during winter and 23 to 24°C in summer. In the mountainous areas, precipitation occurs especially between October and March, due to the passage of the Azores anticyclone.

The prevailing winds, the northeast trade winds, bring some clouds, humidity and precipitation to the north-facing slopes. Because of the trade winds, the north side is wetter and windier than the south side, which has a drier landscape; the city of Funchal, on the south side, is quite sheltered from the wind. In the period from June to September, Madeira can be affected by the Leste, a hot and dry wind blowing from the Sahara, which can raise the temperature above 30 degrees and bring a fine red dust. This wind is rarer in Porto Santo.

Lisbon has a Mediterranean climate, mild and rainy in winter, hot and sunny in summer. Summer, from June to mid-September, is hot and sunny. The average temperature reaches a maximum of 23.5°C in August, so it is not too high, and besides the breeze blows from the ocean, tempering the heat. The clarity of the air makes it clear that we are not on the coasts of the Mediterranean, where the summer tends to be more stifling. Generally, the temperatures are pleasant, in fact, the maximums do not reach 30 ° C, and the minimums fall slightly below 20 ° C. For swimming, the sea in Lisbon is relatively cool: the water temperature ranges from 18 °C in June, to 19 °C in July, to 20 °C in August and September. The Nortada (north wind) blows almost every day. It rises in the early afternoon and strengthens during the day.

Located at the same latitude as Lisbon, the Azores archipelago offers a humid oceanic climate with very small temperature variations ranging from 15°C to 26°C. The archipelago experiences significant rainfall, particularly from autumn to spring (November-March). The summer months (May-September) are much drier and sunnier.

The position of the high-pressure area varies with the seasons: it moves between Bermuda (summer) and the Azores (winter-spring), affecting the atmospheric circulation in the North Atlantic and therefore the weather in Western Europe.

Proposed itineraries (click on the map below for more details): 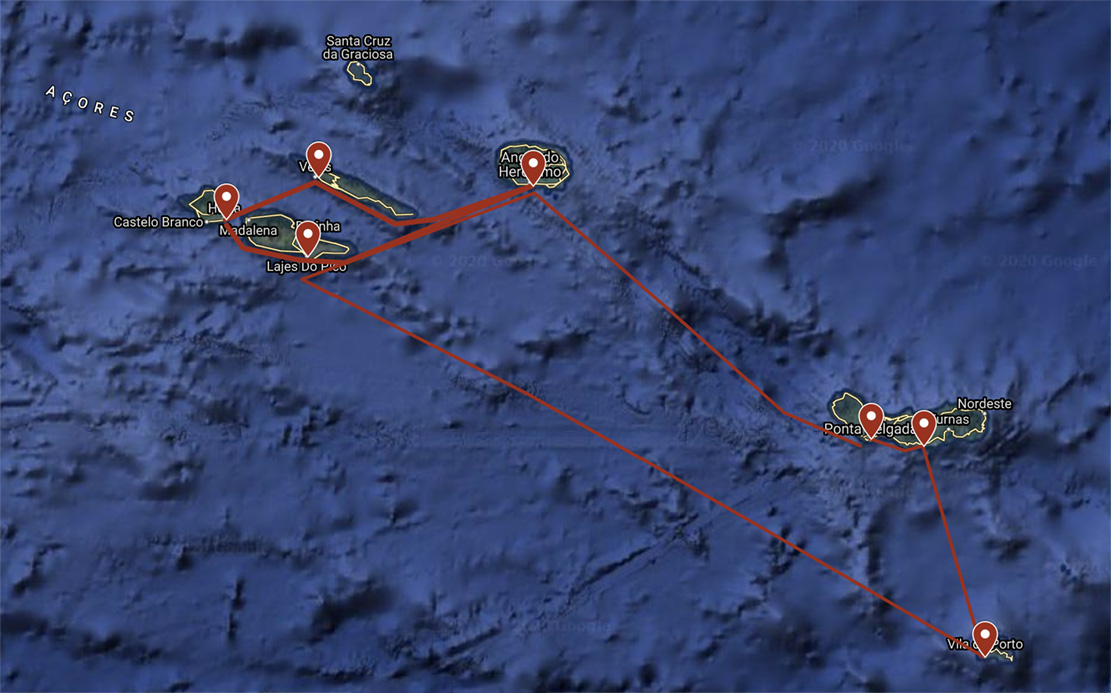 The best catamarans and sailboats for rent in the Azores are located in Horta and Ponta Delgada (click on the maps below for more details):

Proposed itinerary 7 or 14 days from Horta 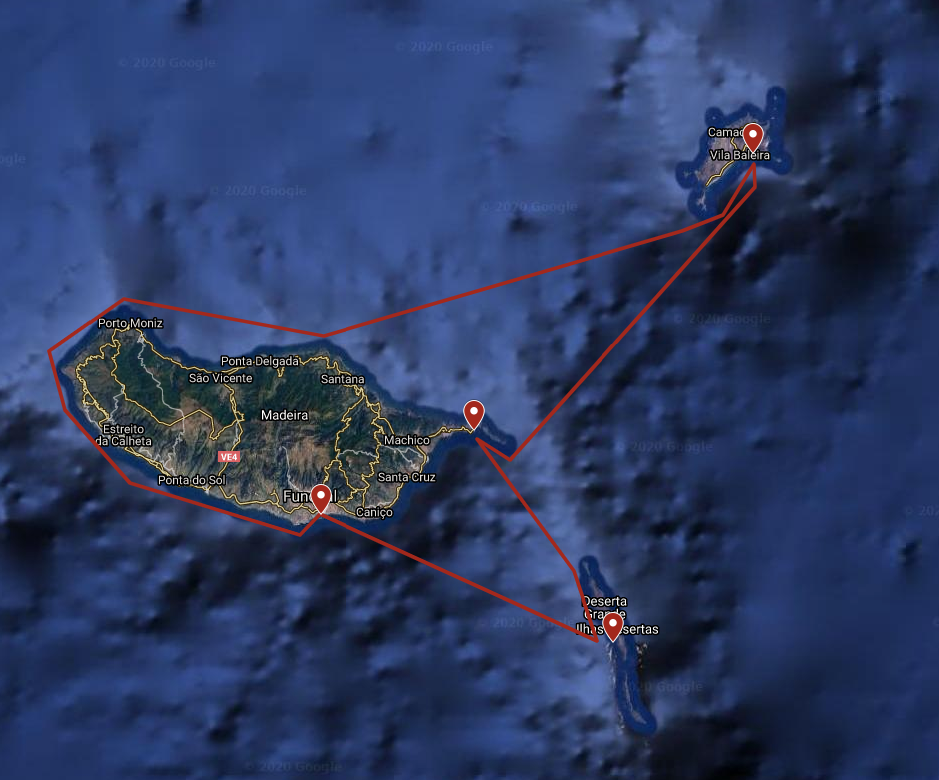 The best sailboats for rent in Madeira are located in Funchal (click on the maps below for more details):

7 or 14 day itinerary proposal from Funchal 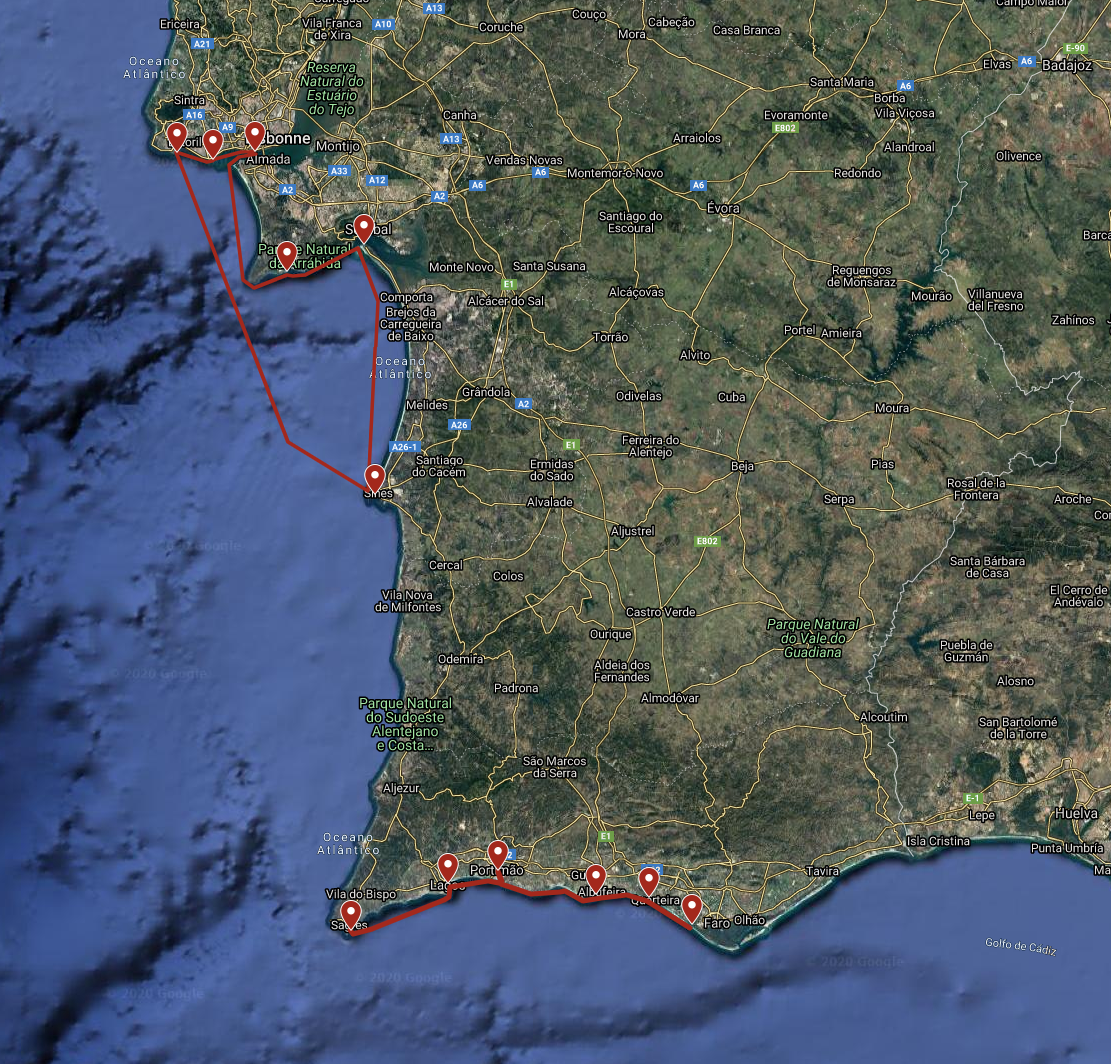 The best sailboats and catamarans for rent in Portugal are located in Lisbon, Cascais and Portimão (click on the maps below for more details):

Note: The proposed itineraries are based on a navigation of 2 to 3 hours per day at an average speed of 5 knots. If you are looking for other itinerary ideas or have any questions, please contact us. We will be happy to help you plan your cruise.